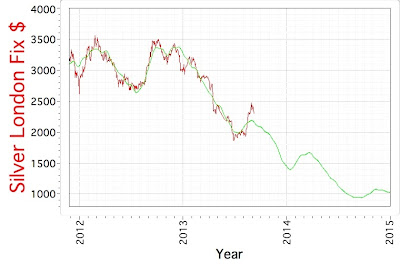 The spike in silver prices is reversing, as previously suggested by the divergence between the model prediction and the actual price. The cycle model is seeing silver prices in the 1500 +/- range by the end of 2014. A major caveat is that, as some readers have pointed out, there is a large divergence between predicted silver and gold prices going forwards after early 2014. I will inform readers if either the silver model or the gold model start taking too many iterations to converge, which is usually a bad sign for the health of the model, and of the modeler, on occasion.
Posted by Paolo at 3:06 PM No comments: 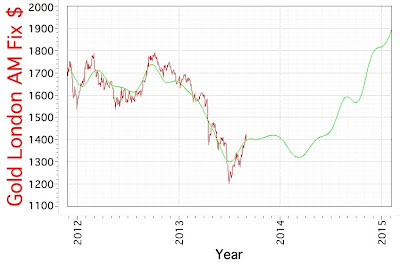 The gold cycle model is right on target, but that is more luck than anything else. There is an error associated with the price curve, but in this case 'the mean' prediction happens to lie on the actual price curve.  One can see this is not always the case!   From now until the end of the year, the model predicts gold to remain range bound in the 1400 +/- area. Once again, for Elliott enthusiasts, it looks like a Wave II is in the offing in early 2014, before a rise to 1800 +/- by the end of 2015; remembering that these models lose price accuracy faster than time accuracy in terms of turning points when looking forwards.
Posted by Paolo at 10:53 AM 1 comment: 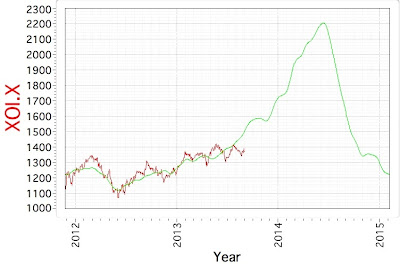 The oil index cycle chart is in reasonable convergence with prices, and has been performing well if you look at the previous editions.  The model is suggesting higher prices going forward, with a lot of pressure building for a price jump the longer the divergence between the model and the actual price continues. One of the interesting things about this model is that it shares some cycles in common with gold, and it also has one cycle which is in line with the Pacific Decadal Oscillation, which now presages colder weather.
Posted by Paolo at 3:51 PM No comments:

Foundation for the Study of Cycles